Taking advantage of the powdery white mountains is a pastime enjoyed by many. Carving down mountain tops in your skis or snowboards with friends and family is something that you’ll never forget. For those that gain a real love for the activity, it quickly becomes smarter to get your own gear rather than paying exorbitant rental fees. However, with your own equipment, you’ll need to figure out transportation to and from the mountains.

Whether your choice is skiing or snowboarding, one popular way of transporting your gear is through the use of roof-mounted racks.

What Is a Ski and Snowboard Mount Rack

With how long snowboards and skis are, getting them inside your car can be quite the predicament. For a lot of cars, the task can be downright impossible. With the backseats folded down, your equipment invites dirt and grime into your vehicle’s interior. With that in mind, many people turn to using ski and snowboard mount racks to transport their gear.

A ski and snowboard mount rack is a relatively simple mechanism. Sitting on your vehicle’s rooftop crossbars, the device simply unfolds on a hinge. You then place your skis or snowboards in and close the device. The inside of the carrier is lined with soft rubber so that different thicknesses can be accommodated without damaging your equipment.

Even with the simplicity of ski and snowboard mount racks, there are still a few considerations to be made. The first is the debate regarding a roof box vs ski rack. Roof boxes are a popular alternative to ski racks and offer greater utility with the ability to carry more than just skis. However, they tend to be significantly more expensive, bulkier, and more of a hassle to install and dismount.

If you are only interested in transporting winter sports equipment, then ski racks are a great option to save money and space.

Most SUVs already have roof rails as standard, so you will only need to worry about the crossbars. Many of the good ski and snowboard mount racks come with universal mounting systems, so you should be safe with any crossbar of choice.

After fitting your vehicle with roof rails and crossbars, you will then have to decide how many skis or snowboards you are planning to transport. There are predominantly two different sizes available to haul winter sports equipment. The smaller size allows for 4 pairs of skis or 2 snowboards with the larger size fitting up to 6 pairs of skis or 4 snowboards. Carrying both skis and snowboards is also possible with a lower capacity for each.

As you can imagine, the large size you go for, the more expensive the rack will be.

Security & Ease of Use

When looking at ski and snowboard mount racks, there aren’t many features to compare.

However, one thing to take note of is whether or not your model comes with a lock. Since your skis and snowboards will be exposed for all to see, locking them up is essential. While most racks now come with locks as standard, some of the cheaper options may discard this feature.

Another overlooked feature is its method of opening. In the winter months, you will most likely be operating the rack in large gloves. A large easy to press button making mounting and retrieving your equipment easier. Thankfully, most of the popular brands already include oversized open buttons for ease of use.

How to Install a Ski and Snowboard Mount Rack

Installing a ski and snowboard mount rack is a relatively simple process that can be done alone. There are two main systems of mounting the racks to the crossbar. One involves screwing bolts through brackets, which can be seen here. The other method, found on higher-end models, involves a rubberized band that wraps around the crossbar and is then ratcheted tight to secure the rack. An example can be found in the second half of this video.

What is Best Ski and Snowboard Mount Racks

There are many different ski and snowboard mount racks on the market. Below you can find some of our top picks and favorites.

Yakima is one of the most popular vehicle cargo accessory companies in the market. The FatCat EVO on amazon is one of their most popular and premier products. The ski and snowboard mount racks are available in both a four ski capacity as well as a six ski capacity. It is also available in both a black and silver finish to better complement your car. Additionally, it features an aerodynamic design that promises to reduce any possible wind noise when driving.

The FatCat EVO is equipped with a simple universal mounting system for easy installation. The universal system uses a strap to wrap around any crossbar design. The strap is then tightened to ensure a snug fit. This ski and snowboard mount rack also comes with mounts for both square and round bars, for a more precise fit.

To deal with the possibility of ski and snowboard bindings hitting your roof, the FatCat can be elevated on one side, providing more clearance for the bindings. To accommodate thicker boards and skis, the hinge can also expand upwards allowing for more even pressure to be applied.

Overall, reviewers have given a lot of praise to the FatCat EVO. For most, the installation was a breeze. It adds minimal wind noise and it has been keeping peoples’ gear nice and secure for years.

The Thule SnowPack on amazon is another great ski and snowboard mount rack to consider. Along with Yakima, Thule is another leader in the vehicle cargo accessory space and is known for its quality products.

The SnowPack is no exception. It comes in both a medium 4-ski size as well as a large 6-ski size. It also is available in both black and silver colors. As with other premium options, the SnowPack has a very simple and universal mounting system. A thick rubberized strap wraps around any crossbar shape and attaches to the other side of the rack. There it is ratcheted included to provide a tight and secure fit. Along with its Speed-Link mounting option, Thule also includes traditional T-Track mounting brackets for an even more secure option on compatible crossbars.

To deal with ski and snowboard bindings potentially scraping your roof, the Thule SnowPack also comes with spacers to elevated the mount even higher. To accommodate varying thicknesses of gear, the soft rubber has a lot of room to compress and the hinge can even extend upwards to provide a better fit.

Customers have given a lot of praise to the SnowPack. The ski and snowboard mount is one of the easiest to both install and use.

The SportRack Groomer Deluxe on amazon is a great budget option. While Sportrack is a less-known company, it’s actually owned by Thule, meaning that its quality should still be outstanding. The Groomer Deluxe comes in a sleek black corrosion-resistant aluminum finish that should look sleek on any car it’s mounted to. This ski and snowboard mount rack comes in a large size, allowing you to carry six pairs of skis or four snowboards.

The installation method requires you to thread two bolts through two brackets that hug the crossbar. It’s a less elegant installation process than the bands found on more expensive models, but it is still largely universal. For additional security, the bolts used don’t have the traditional hexagon pattern, so be sure not to lose the included Allen key. A lock is also found underneath the large button so that your gear can be further safely secured.

Reviewers have stated that the SportRack is a great alternative to more expensive options.

The Rhino Rack Ski Carrier on amazon is the perfect choice for someone that wants a compact ski carrier. The Rhino Rack is available in a variety of sizes, but its most interesting one is the 10-inch model, allowing just two pairs of skis to be transported. The compact choice is perfect for those that don’t need to lug around large hauls of equipment. Additionally, it is the cheapest carrier on this list and it takes up minimal roof space. You can even offset it to one side and mount different hardware on the other side.

The Rhino Rack comes in a nice black aluminum finish and a contrasting logo. Mounting is largely universal and involves screwing in bolts through two brackets to surround the crossbar. The bolts used are security bolts, so make sure to keep the included Allen wrench safe. In the summer, this ski carrier can also double as a fishing rod holder, increasing its year-round utility.

Reviewers have been largely positive regarding how easy to use and install the Rhino Rack Ski Carrier has been.

Coming from a market leader, the Thule Universal Snowsport Carrier on amazon is the more budget-friendly option. While the price may be lower than their premium offering, the Snowsport Carrier is no slouch. Visually, this version looks almost identical to the Thule’s other ski and snowboard mount rack. This one however is not available in black. The Universal Snowsport is available in a large size, allowing to transport up to six skis or four snowboards.

The lower price mostly affects the rack’s mounting system. While more premium options have a universal rubberized metal band that rachets around the crossbar, this version takes a little more work to install. Instead, you will have to line up the lower part of the mount under your crossbar and thread bolts through both the top and bottom piece, sandwiching the crossbar.

As with most other mounts, the Snowsport comes with a lock and safety bolts for added security. Additionally, this ski and snowboard mount offers an easy-to-press oversized button for ease of use in winter gloves. Despite the lower price, many customers have been happy with the performance of the Snowsport and is wholeheartedly recommend at its price. 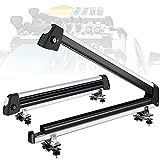 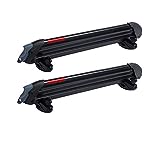 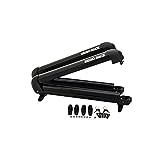 With the wide variety of skis and boards available, finding your perfect fit can be difficult.

YAKIMA, FatCat EVO Premium Ski & Snowboard is our top pick for the Best Ski and Snowboard Mount Racks. and if your on a budget The Rhino Rack Ski Carrier is the perfect choice for you.

If you're looking for something with even more space, take a look at the Thule 91725U Universal Snowsport Carrier.

We hope you found this article helpful and, if so, please share it with your other ski or snowboard enthusiasts. If you have any questions about which skis or boards are the best for you based on what we've discussed in our blog post today, don't hesitate to contact us, we'd love to hear from you on your next ski or snowboard purchase.

My passion here at theroofboxes.com is to provide helpful straight forward clear advice and tips for Automotive Accessories.

The Roof Boxes is a website dedicated to helping people find the best automotive accessories,

and more, and more.

DISCLAIMER THEROOFBOXES.com is a participant in the amazon services LLC associates program, an affiliate advertising program designed to provide a means for sites to earn advertising fees by advertising and linking to amazon.com. Amazon and the Amazon logo are trademarks of amazon.com, Inc or its affiliates.

Can You Put Roof Racks On A Car Without Rails?

Can You Put Roof Racks On A Car Without Rails?

Can Roof Rack Go Through A Carwash?

Can Roof Rack Go Through A Carwash?